The Holocaust and “Violins of Hope:” A Conversation with Kristi Seehafer

A Conversation with Kristi Seehafer //

[Editor’s Note: Music, songs, and the instruments that make both possible can all be powerful forces for life and healing — sometimes in unexpected ways! Last spring, the Nashville Symphony collaborated with Violins of Hope, a collection of restored instruments played by Jewish musicians during the Holocaust. This fall, Streetside Conversations had the opportunity to speak with Kristi Seehafer, a violinist in the Nashville Symphony, about music, the Holocaust, and the experience of playing a violin with such a powerful history.]

SC: Can you tell us a little about Violins of Hope, and your involvement with them?

Violins of Hope are instruments that were played or connected in some way to the Holocaust, and that have been restored into playable condition. I wasn’t raised Jewish, and I am Jewish now, and so this was a very meaningful experience for me since I don’t have the typical Jewish family experiences. That being said, there almost wasn’t a time that I can remember when I didn’t know about the Holocaust. My dad was in World War II, and it was a subject in our home that was often talked about… . So, I really am proud to have been a part of this project.

The violin that I played is one that we really don’t know the history of. Some of the violins we did know the history of, but the only thing I knew about this instrument was that it was probably played by a Klezmer musician, because it was highly decorated, and had a Star of David on the back and some other decoration. That meant that it was played by a musician who could choose and pay to have his instrument decorated. It was kind of like a calling card, so the more decorated your instrument was, it meant that you were more successful and you had more money to decorate your instrument… .

It was also one of the quartet instruments. I not only played that violin in two concerts with the symphony, but I also did a solo recital with piano, and with a string quartet of Violins of Hope instruments at my synagogue. That was really amazing, because I think there were about 300 or more people there.

It really meant that these instruments had a voice, for the first time in who knows how long.

SC: What sort of music did you play?

The program had already been chosen by the time I got involved with it, oddly enough: Bartok Romanian folk dances, the slow movement of the Brahms A Major Sonata, Bloch Aboda, and then the last piece was an arrangement of a Gershwin song that I did with a cantor. That was the solo violin stuff, and then we did a movement of a Beethoven string quartet, and then a movement of a quartet by Simon Laks.

This program was chosen by the rabbi and people from the synagogue for various reasons, usually because of connections to the composers and their life (their Jewish life)

When these instruments were played originally…  I’ve read so many stories about concentration camp life, and how people chose to live or die, when they had that option—and often of course they did not have the option, they just died. But I’ve read a lot about the survivors, and what went through their minds, because some people just gave up, and others still retained the will to live…

Well, it’s really important now, because the political situation now in many ways is beginning to mirror some of the things that happened in the 30’s and 40’s leading up to World War II and the Holocaust. And as survivors are dying off, there are so many people saying that this never happened. And it’s really important to remember that this did happen, and it can happen again, and that it is happening again, and we need to do whatever we can to prevent it from happening again.

SC: This question may be too far-reaching, but do you have any thoughts personally on how you think some of the former owners would respond to knowing that the instruments are being played again?

SC: Have you seen people respond in a powerful way, or is there any instance of responses to hearing and seeing the instruments played that has been striking to you?

I personally haven’t seen that type of response, but it’s because it can be so overwhelming that it’s sort of a private thing that happens later on. I’ve seen a lot of people be really appreciative, and they want to see the instruments, and they love to see them and hear them. But, it can be overwhelming for some people, and I think that’s why I haven’t personally seen that type of response.

SC: For you personally, what was it like the first time you opened the case and saw the violin?

We had a selection process, and there was an order we were going to go in, so there was no guarantee I was going to get any particular instrument. I went in there wanting to sort of find the right one, and be attracted to the right one… And it’s really kind of strange that the label inside the instrument that I got, which was one of the quartet instruments, was dedicated to the survivors of certain atrocities in various towns in Poland. It was called the “Barns” violin, and it was called that because in these cities in Poland the Jews would be rounded up and locked inside of barns, and the barns would be set on fire. And one of the cities was a city in Poland that had an almost identical spelling to the township that I grew up in in Wisconsin. And that sort of gave me chills. I found out later that it was a different town altogether… but at first, when I first heard about this, I thought that was just too weird, too strange. And the connection with Poland too, because I had an uncle from Poland who—at the time I wasn’t Jewish, when he was alive—but he was, I would say, quietly Anti-Semitic, because he didn’t really want to be overt about it, but he definitely held those views. I don’t know what he would think now, if he knew that I was Jewish, but I don’t care!

I think that the Weinsteins, the fact that they’re doing this, it’s an amazing labor of love, and an amazing project. I’m really grateful to them for doing this.

SC: It’s one of the more unique acts of justice that we’ve come across. 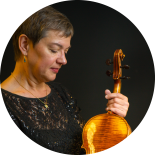 Kristi Seehafer joined the Nashville Symphony in 1991. A native of Wausau, Wisconsin, where she played piano in her brother’s polka band in high school, she holds a Bachelor of Arts degree from Concordia College in Moorhead, Minnesota. She began her studies as a voice major, sang in the Concordia Choir under Paul J. Christiansen, and later switched her focus to the violin. Kristi earned her Master of Music degree from Northwestern University in Evanston, Illinois, where she studied violin with Myron Kartman and Blair Milton, and orchestral repertoire with Victor Yampolsky. Previously, Kristi has performed with the Knoxville Symphony and the Fargo-Moorhead Civic Symphony and Opera Company. An avid traveler, she has also performed with orchestras in Texas, Colorado, Oregon, Spain, Slovenia and Austria. When she’s not practicing or fixing up her house, she enjoys gardening, hiking, swimming, bicycling and rollerblading. An avid distance runner and triathlete, she is a proud member of the Nashville Symphony Legacy Society and the Hadassah Legacy Society.