Recovering a Childhood in a Syrian Refugee Camp

The wind blows over the hot desert sand.
The makeshift tents sway to the rhythm of the unseen source of power.
Sometimes nature strikes viciously, sometimes the air stands still.

When the storm rages, it sends life into chaos.

Chaos of disorder, destruction, and uncertainty.

Khaled is a 16 year-old Syrian who has been caught in the storm of war. Once an average teenager living in Syria, he is now a refugee residing in Azraq Refugee Camp in a desert area in Jordan. Unlike other refugees who can move more ‘freely’ within the premise of the camp, Khaled must stay in place. Khaled’s home, Village 5, is surrounded by barbed wires. The entrance is guarded by Jordanian soldiers armed with assault rifles.

Village 5, or ‘a prison within a prison’ hosts refugees who have fled ISIS-infiltrated areas in Syria. Since these refugees are considered to be a potential security risk, they must go through a strict vetting process to be released to other sections of the camp.

The unique arrangements of Village 5 mean that aid agencies have restricted access to refugees there. As a result, Khaled’s village was slow to receive basic services in the early days of this establishment and still has limited educational and employment opportunities. With nothing much to do, many refugees stroll aimlessly through the wide-open spaces or stay in their caravans where the temperature fluctuates between extreme heat and cold.

“We used to go to the field outside the caravans on our own, and everyone would look at his phone. I didn’t have many friends.” Khaled told me somberly during an interview in March earlier this year.

Despite having fled the immediate danger of war, Khaled and his friends find themselves experiencing new challenges of boredom, isolation, and loneliness.

The children of Syria are one of the most severely affected population of the war, but they will also grow up to become the rebuilders of a broken nation. How can we help young people like Khaled to heal from their invisible wounds?

The psychosocial effects of conflict and violence often go unnoticed and are unspoken. But children who grew up exposed to heinous acts of war and bloodshed suffer from long-term, devastating psychological effects. Recent research have shown that over three-quarters of conflict-impacted children in the protracted Syrian crisis exhibit symptoms such as aggression, depression, bed-wetting, and developmental issues.

The first step to helping young people overcome their traumatic experience is to make them feel safe and cared for. Faced with the uncertainty both of being a refugee and of living in a camp, children and youth need to continue to learn, socialize, and play.

At Capoeira4refugees (C4R), we help children heal by letting them be children again. We use capoeira, an artform encompassing elements of dance, music, and acrobatics, to allow them to recover a childhood that has been ruthlessly robbed from them.

Capoeira has a unique history; it was born out of slavery in Brazil in the 16th Century. During times of violence and displacement, capoeira emerged as a tool of resistance, self-expression, and community mobilization among the slaves.

Today, vulnerable communities all around the world such as refugees share similar struggles with the founders of capoeira. Therefore, in the context of war and displacement, capoeira is not only being used as a platform for self-expression through arts and sport, but also helps refugee youth to find and harness the power of community in an ever-changing and complex environment.

In a typical game of capoeira, two players perform movements that combine acrobatics, dance, and rituals in the center of the circle known as the roda (photo above). Each player is given a turn in the game to display their own personality and style with a partner. Unlike other forms of martial arts, capoeira players do not physically contact each other. In fact, the only point of contact occurs with a handshake before the game starts and as the pair exits the circle at the end of the game. Since the goal of capoeira is about strengthening one’s self-confidence, creativity, agility, and concentration, the game is played peacefully and produces no winner or loser.

Capoeira is a community activity supported by a live orchestra and individuals who make up the roda. Thus every person has a role to play and something to offer to keep the game going. One can contribute by playing instruments, clapping to the rhythm, singing capoeira songs, or performing movements. The integration of these human elements enable a game of capoeira to carry on. In this safe space, capoeira helps to break down body politics of gender, class, and race.

In the midst of raging storms in Khaled’s life, you can find him singing and clapping to the beat of capoeira music from a tent in Village 5 in a roda with other Syrian refugees. Many traditional capoeira songs echo the slaves’ desire to return to Africa; Khaled’s singing echoes his longing to return to a peaceful Syria. In this space, Khaled temporarily puts aside the stresses of his situation to enjoy the company of old and new friends.

“Since capoeira,” Khaled says, “we have formed a strong bond with each other. I like the way capoeira teachers treat us. They help, laugh, and accept us even when we make them angry. We now have something to look forward to doing together. Not one day goes by without us hanging out together,” Khaled proudly reports.

No one knows when this war will end, or what Khaled and his friends’ future brings.

But until the skies clear, deep friendship, mentorship, validation, and community support will keep Khaled dancing in the storm. 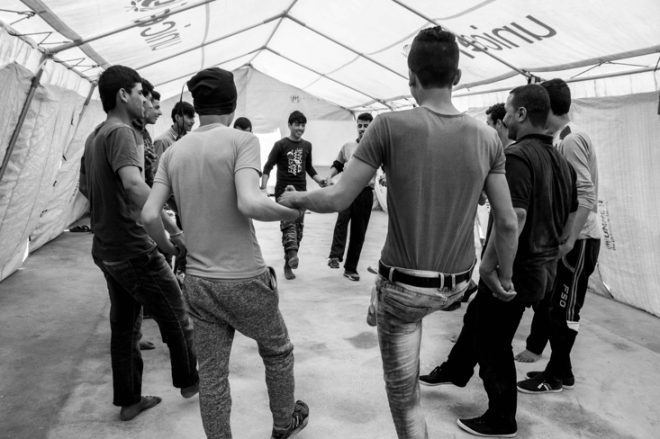 Janice Leung lives in Amman, Jordan where she works with Capoeira4Refugees to promote sports as a recovery and development tool in refugee camps and host communities. She has also previously worked with La’o Hamutuk, a local think tank in Timor-Leste to research economic development and livelihoods. Connect with her at janicecyleung@gmail.com.

“Inclusion is an attitude. If we can sow the seed earlier in children’s life, we can make a bigger change later on.”